Samsung released its first smartwatch, the  Samsung Galaxy Gear in the fall of 2013. Every iteration thereafter included the word “Gear” in its name. Just like the mobile giant has used “Galaxy” in the branding of its smart devices, the “Gear” brand was specifically for their smart watches. That is until now.

Samsung has rebranded its smartwatch category with the introduction of the Galaxy Watch at its “Samsung Galaxy Unpacked 2018″. Event this morning at the Barclays Center in Brooklyn (the Note 9 smartphone was also unveiled as well today) . The Galaxy Watch is the direct successor to 2016’s popular Galaxy Gear S3 (although the Gear Sport was released in 2017, no one really considered it to be in the same class as the Gear S3). Samsung is getting in front of the competition with the Galaxy Watch considering that both Apple and Google will release their latest generation wearables sooner rather than later. 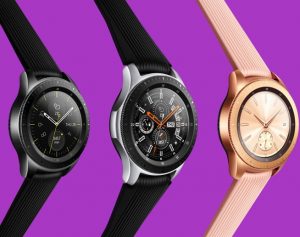 The new smartwatch has an updated design and looks and feels very premium. It now comes in two sizes: 42mm and 46mm. The Gear S3 is a large watch and appears to swallow smaller wrists, so the Galaxy Watch will have the same effect. It has an AMOLED display that is crisp and vivid as on the Samsung smartphones and has military-grade Gorilla DX+ glass.

A new color was also introduced: Rose Gold. It looks simply amazing. The Galaxy Watch will have three colors in all – Rose Gold, Midnight Black, and Silver. The silver will be limited to the 46mm size and the Rose Gold and Midnight Black will only be available in the 42mm size.

Samsung not only designed a gorgeous timepiece in the Galaxy Watch, but a fully functional one as well. Samsung has been pushing the health features of their watches over the last few years and I didn’t expect anything different this time around. It’s new processor was designed specifically for smartwatches. With a larger battery than its predecessors,  Samsung says that you can get “several days” of battery life on a single charge and it is water-resistant up to 5 ATM.

The LTE models have a standalone GPS to log your distance when cycling or running. With Spotify as a returning feature, you can enjoy your jams while away from your phone. The LTE versions are only available from T-Mobile, AT&T, Verizon, and Sprint in the US and you can order directly from Samsung upon release.

The Galaxy Watch tracks almost another 40 exercises and a few of those start tracking automatically based on movement and heart rate.The Galaxy Watch’s focus on wellness adds more value to the device and encourages people to live a healthier lifestyle. It can track your sleep and give you an idea of the quality of rest you had the night before. Additionally, a new addition to Samsung’s feature set are breathing exercises. While the Apple Watch and Fitbit, both have this feature as well, Samsung’s version ties it to your established baseline heart rate to give you an idea of how much stress you are under at that moment. 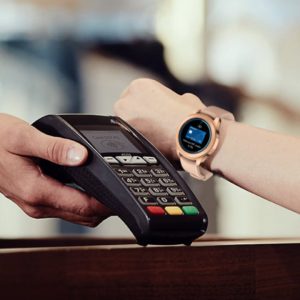 Stay tuned for our full review after the Galaxy Watch is released.