The ZTE Axon M – Is it a smartphone, a flip phone, or both? Whatever it is, it’s a lot of fun. The “M” in the Axon M name stands for “Multi-Mode” because it can be used and viewed in a multitude of ways. While the name itself doesn’t tell how different this device is from the competition, it became obvious the moment I started playing with it. The Axon M sports a 5.2 inch screen, then ANOTHER 5.2 inch screen when folded open, which turns into a 6.8 inch mini-tablet. Or a gaming console, or video 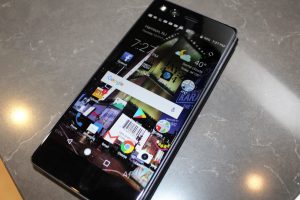 player, or whatever. It is the most interesting new gadget that I have held in my hands in a long time.

Folding smartphones have been teased about for years now and some poorly executed models have even made it to market. Samsung is reported to bring its own version to market sometime in 2018. So is Huawei (the largest smartphone maker in China who is slowly working its way to the U.S.). However, ZTE has the honor of being the first out of the gate.

How different is the Axon M from the flip phones that we grew up with? Very. It looks and feels like any typical smartphone except heavier. Not uncomfortably so, but it is noticeable. Instead of flipping vertically like a flip phone, it opens horizontally, like a book.This is when the magic happens. 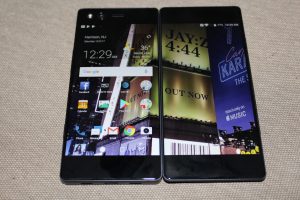 For faster set-up, I used a backup that I saved on Google from the LG V30. My wallpaper is a picture of the digital billboards in Times Square that I took when I first moved to the New York area. The wallpaper looked great on the V30, but I didn’t realize how much it popped until I viewed it on both screens of the Axon M. What the Axon lacks in crisp pixels that the LG V30 and the Galaxy S8 showcase, it makes up for in presentation. It is the most unique phone to be released this holiday season.

The Axon M has a few different ways to use the screen. Video looks great in the full-screen mode. Full-screen mode is also great for gaming. Reading an e-book is also amazing in this mode simply due to the amount of real estate that is available on the screens.

There is also multitasking where you can run two completely separate apps, one on each screen. Multitasking, or split-screen, has been around for several years now on the Android platform, but not until now have we been able to do this on two full-sized screens. You can have your home screen and 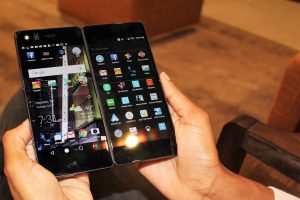 your app drawer. Maybe it’s texting and watching a review on my budding YouTube channel (shameless plug). There are tons of multitasking opportunities available. With a swipe of three fingers, you can swap the apps back and forth between screens.

Finally, there is tent mode. The Axon M folds over just like a table tent and you can play and control the same media on both screens. This is great to allow two people to watch the same content without hovering over each other’s shoulder. I had particular fun with this when pairing the Axon to my Amazon Echo, dancing around my living room, and seeing the video from both sides of the table.

As far as performance, the Axon M is nimble and quick enough for the average user. It doesn’t sport the specs of the Note 8 or the iPhone 8 . It sports a Qualcomm Snapdragon 821 processor, 4GB of RAM, 64GB of internal storage, and microSD expansion up to 256GB. Frankly, this is enough speed and power for most. It also has a 3,180 mAh battery and Quick Charge 3.0,  and a 3.5 mm headphone jack. I did notice that the battery drains quicker when both screens are in use. It is running Android 7.1.2 Nougat. There is a 20 megapixel camera on the Axon M. Not a front and rear camera like most phones because you only need one. ZTE took advantage of the second screen by making it a viewfinder. When the camera is activated, you are instructed to flip the phone over and you’re ready to shoot. The Axon M also features a fingerprint sensor on the side of the body of the phone. It feels odd in that location, but because of the design with  second screen, there wasn’t any other logical place to put it.

To conclude, the Axon M does not sport the best specs of the latest smartphone releases. It is slightly

heavy and the fingerprint sensor feels awkward on the side of the phone. However, the performance is still solid and more than adequate for everyday use. You might want to keep a quick charging cable handy if you plan to use the multi-screen functions throughout the day. When it comes to the “Fun Factor”, the ZTE Axon M is the most unique release this season and is definitely worth stuffing in the proverbial stocking.